Joined 9 mo ago
·
2 Posts
Hi everyone,
I searched through the threads before I decided to write this, but could not find the answer to what I was looking for. Our sweet 4 month old puppy is not liking the food we give her. The breeder we got her from had her on -market place I think it’s called and she wouldn’t eat. She was also given Steve’s Freeze Dried food. The problem is we’ve had her for 2 weeks and she would not eat the kibble and we wanted her on a better one anyway. So we switched to Fromm Puppy. She’s not interested in that either. She seems to really like the freeze dried stuff.
My concern is, it seems like all free dried foods are grain free and I was under the impression that grain free was a big no now.

I’ve tried taking the food away after 30 mins, wetting it, but nothing works. She’s only interested in the freeze dried. Any suggestions would be great.

Joined Mar 24, 2019
·
1,537 Posts
It's not that grain free is bad. It's that the fillers that are often used in place of grain (like legumes) are not so good. You are perfectly fine using a freeze dried raw food that has no grains so long as it doesn't have a lot of legumes. Ziwipeak or Real Meat brands are excellent, though they are air dried. I use them for training treats.

Joined Feb 25, 2019
·
1,031 Posts
I wouldn't use freeze dried, unless it specifically states "for all life stages" or "for puppies". A lot don't. You could try mixing kibble with a little bit of canned food. There are also several small breed puppy kibble recipes out there - most pet stores will give you samples to try.

Here's some excerpts from an article in The Whole Dog Journal re specific ingredients suspected to be involved in the health concerns being raised. The whole article is worth reading so I'll link to it also,


"Grain-free diets represented 91% of the products implicated in the reports; 93% contained peas and/or lentils. Potatoes and/or sweet potatoes were present in 42% of the products. These numbers are far more intriguing.

The inclusion of peas, lentils, chickpeas, and other legume seeds have reached some sort of critical mass in recent years with pet food manufacturers. Though they’ve been present in many pet foods for at least a decade, in recent years, the percentage of their representation in formulas has grown. We wouldn’t worry unduly about one of these ingredients appearing on an ingredients panel in a minor role – 6th or 7th or lower on the list, say. But if there is more than one of these ingredients on the list and/or one in one of the top five or so positions on the ingredients list, for now, we’d look for another product to feed our dogs."

For now, we would strongly recommend avoiding foods that use peas – including constituent parts of peas, such as pea starch, pea protein, and pea fiber, and especially multiple iterations of peas (such as green peas, yellow peas, pea protein, etc.) as major ingredients. If any one of these appears higher than the 6th or 7th ingredient on an ingredient list, for now, we’d switch to foods that do not display this trait.

Same goes for chickpeas (may be referred to as garbanzo beans), any other type of bean, and lentils.
We’d switch away from any foods containing more than one of these ingredients (peas, beans, or lentils)." 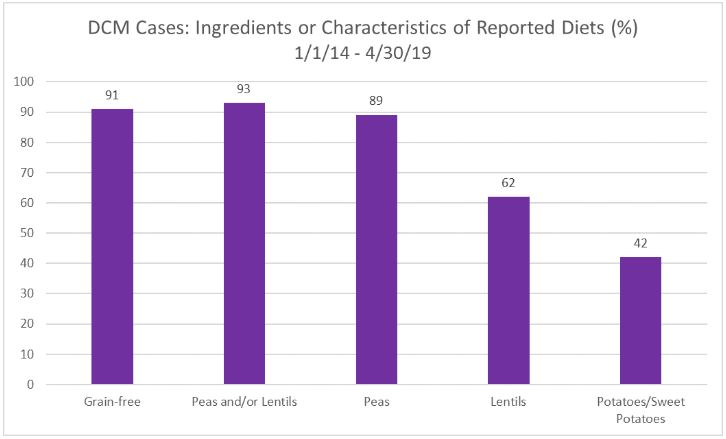 On June 27, 2019, the United States Food and Drug Administration (FDA) released an update to two previous advisories regarding dog food and dogs who had developed dilated cardiomyopathy (DCM). The release made a splash in the mainstream news – but this is all that most people seemed to get out...


Look up AAFCO and wsava.org for further nutrition info.

Joined Jan 29, 2018
·
248 Posts
I've fed my toy freeze dried raw for as long as I've had him (2 years this week). His breeder had him on raw with a little kibble mixed in. I continued with Primal freeze dried and the vet says he's the picture of health. I don't believe either Primal or Stella & Chewy have very much in the filler department. Both brands are pretty much all protein, veggies and fruit. I mix in about 1 ounce of broiled cooked chicken, but beyond that, he gets freeze dried raw as food and as training treats (I use Stella & Chewy Lil Bites).

Both of these brands are for all life stages.
1 - 5 of 5 Posts
Join the discussion
Continue with Facebook
Continue with Google
or sign up with email
About this Discussion
4 Replies
5 Participants
Last post:
mary2e 7 mo ago
Poodle Forum
A forum community dedicated to all Poodle owners and enthusiasts. Come join the discussion about breeds, training, puppies, food reviews, grooming, and more.
Full Forum Listing
Explore Our Forums
Poodle Talk Poodle Pictures Poodle Grooming Member Introductions Poodle Health
Recommended Communities