Joined 7 d ago
·
13 Posts
Hi, I have a 4 month old toy poodle and this is the first time i am getting a puppy. Most puppy's i have seen are active. My poodle eats well -at-least 2 times a day. But she is super quiet- mostly is sleeping. She barely runs around. If you leave her in a spot she will simply stay there. I was under the impression toy poodles are active but she is absolutely not. Is this normal. Her food eating and bowel moments seems fine.

twyla said:
4 month old puppy should be eating 3 times a day and if not you need to make sure she is got suffering from hypoglycemia, low blood sugar that could kill her.
Click to expand...

she eats pretty well twice and the 3rd would be random treats and so on. So you are sure that it un-common for a puppy to be inactive.

Misteline said:
How long have you had the puppy? Most puppies need to sleep most of the day, but during the time they are awake they should be very active. I would be concerned about a puppy who just sits there when left alone. Like Twyla says, you need to feed her more often regardless, but sometimes it can take a while for a puppy to get used to their new environment. If it's been longer than a couple of days on the correct feeding schedule I would be concerned enough to take the puppy to the vet.
Click to expand...

We have had him for 5 days now. She mostly seems scared of everything. She eats reasonably well. But does not move around or explore the place. She pees and poops pretty normal. But just not interested in anything. She is vaccinated for Parvo. And has no symptoms. She is perhaps not adjusted to the new environment. When we checked with the vet verbally, she mentioned that its could be a character. No barking, no moving around, very silent- seems a bit too strange character to have.

Ours is simply not! I pray she is ok.

PeggyTheParti said:
She does sound very frightened and shut down. What sort of environment did she come from? Was she introduced to a variety of sights, sounds, smells, etc.? Even simple things like different floor surfaces are important for a puppy to experience at an early age. Same with exposure to males and females of various shapes and sizes.

Thanks Peggy for the reply. We got her from a pet store with many dogs. She was very playful and happy when we interacted with her at the store. But since reaching home its been the opposite. Moreover there are just 2 people at home. We regularly interact with the pet store and the vet. They said it could be a character. If so its a very strange one.

PeggyTheParti said:
She may just be very frightened after being separated from so many dogs, especially if she’s not had much one-on-one time with humans

Are you being quiet and gentle with her? Getting down to her level and letting her come to you? Giving her a warm place to burrow into and a safe, cozy place to sleep where she can see you?

You may find this article helpful: 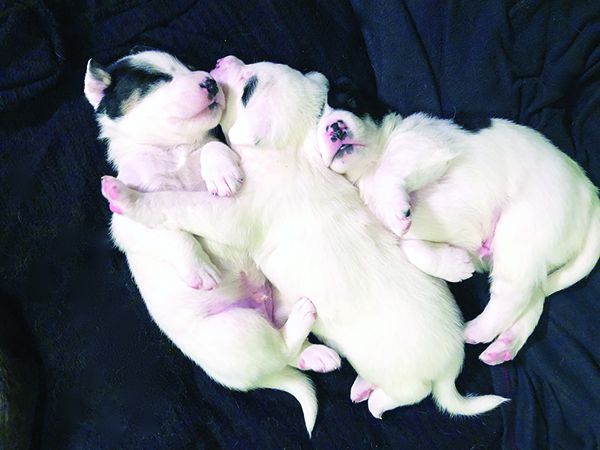 Sometimes new owners tell me getting a puppy was supposed to be fun, but all I feel is stress. Here's what new owners need to remember.

And I would recommend googling “fear periods” and “trigger stacking.”
Click to expand...

Possibly Peggy. Shes treated like a delicate darling - gently lifted- mostly resting in nice places. Even if she is scared that shouldn't last this long- its been 7 days. She stays burrowed in for a long time. Its a bit disheartening.

cowpony said:
If she came from a pet store, there is a good chance she came from a high volume breeder. Big commercial breeders raise puppies like livestock. She is probably just as confused and scared as if you had brought home a baby cow. She is used to being surrounded by her people: dogs. She's not used to being alone with aliens: humans. She's also probably not used to the sorts of new things she is experiencing in your home: the sound of a television, the beep of a microwave oven, the smell of coffee and toast in the morning, the rumble of a clothes washer or vacuum cleaner.
Click to expand...

Yes mate- this does make sense. But i hope this settles soon.

Dechi said:
It seems like she is just frightened. I would give her a week or two and you should see a difference. If she hasn't seen the vet, it would be a good idea to make an appointment. Every new dog/puppy should be taken promptly to the vet for an initial exam.
Click to expand...

Sure Dechi. Thank you. Will patiently wait.

Joined 7 d ago
·
13 Posts
Thank you all lovely people for the messages!

Your little girl is very cute. Has she a name yet?

I'm stopping in mostly to agree with several points already raised and to ask some questions.

Puppies do normally sleep up to 20 hours a day but with active periods in between sleeping. If she is inactive during her waking times, are you playing with her, rolling a ball, giving her chew toys, maybe a puzzle toy to try to figure out how to get a treat from? Training, which is just play to a puppy, is a good way to get her engaged with you. Have you tried to teach her Sit or Come To Me? This is done several times a day in short periods, only a few minutes at a time. If she is fully immunized, is there a secure outdoor area she can be taken to for some outside activity?

Does she have a quiet, out of the way place to retreat to?

If she hasn't been examined in person by a vet, please do so. They will help determine if there's a physical reason for her lack of activity. For example, she may be teething. This is important. How much does she weigh?

Toy poodles do need 3 meals a day, beyond adding treats for calories. The reason is partly the hypoglycemia already mentioned. Having her calorie intake spread more evenly over her day will help her metabolism stay more steady.

Many puppies newly placed in a new home don't bark a lot, partly because they are in an unfamiliar place, regardless of how loving and comfortable. They don't know that they're Home just yet. When I brought two miniature poodle girls home as young adults, they hardly made any sound for at least a week. We thought we had two little Princess poodles who would simply be decorative, seen but not heard. And then they started settling in. They barked! I don't remember at what, but once they found their voices, we knew that they had just felt sort of lost for a while but now they knew they were home.

Dogs in general and puppies in particular do better when there is a routine or schedule being followed.

Would you mind describing what that is like in your home now that she's joined you?
Click to expand...

Dear Rose,
Thank you for the detailed reply. This is indeed useful. Her name is Lola. She just needs time and I need to put in a lot more time engaging with her. She is taking time. She has her own nooks at the apartment where she goes and rests. I dont take her out doors as she is not used to a harness. At this point her movements are extremely limited- her dining area to sleeping zone or yet another zone where she pee's. Once she reaches a zone she spends a lot of time over there. She does not bark - now its been 7 days since we got her and she might have barked 5-6 times at best. I dont know her weight- but she seems healthy. I will wait for another week and if things are still the same I will take her to a vet. Hope she settles in soon.

Johanna said:
Many dogs do not bark as puppies. I think that sometimes they try it and it scares them! I can remember one puppy who barked and then looked all around as if to say "who made that noise?".
Click to expand...

Hi Johanna, Lola has been with us for the past 2 weeks and i don't see she getting any better. Extremely scared, not friendly, confines her to 2 spots and has barked only twice in 2 weeks. I am not sure how to get her comfortable. It seems more and more difficult. Is there any guidelines on what i can do?
1 - 13 of 13 Posts
Join the discussion
Continue with Facebook
Continue with Google
or sign up with email
About this Discussion
35 Replies
11 Participants
Last post:
cowpony 3 h ago
Poodle Forum
A forum community dedicated to all Poodle owners and enthusiasts. Come join the discussion about breeds, training, puppies, food reviews, grooming, and more.
Full Forum Listing
Explore Our Forums
Poodle Talk Poodle Pictures Poodle Grooming Member Introductions Poodle Health
Recommended Communities