On 9/11, Luck Meant Everything

Joined Sep 23, 2017
·
2,483 Posts
The writing is good and the stories are compelling in this article. It tells the tales of how blind luck spared the lives of those who would have been in the Twin Towers but weren't.

As an aside, a few weeks earlier I had scotch taped an ad to the wall in my office as a reminder to take the kids back to NYC for another Broadway play and fun. Later I would stare at that ad, and it was months before I took it down.

On that morning I had my then 12 y/o son with me at work (in Maryland, a couple miles north of DC) for a noon dentist appointment. My mother called and said "Quick! Find a TV, a plane just crashed into the World Trade Center!"

I went to the lobby and we watched as the second plane crashed. Some random guy was standing near me, also watching. I asked something like, "What are the odds that two planes would do this in the same day?" He said it was probably terrorism. I repeated the word, and it felt foreign in my mouth. I couldn't have imaged it. It's like my innocence was lost.

My boss didn't want to let everyone go right away until she had word from the higher ups of my agency. An hour later the Pentagon was attacked. By 11 or so she let us leave. I picked up my then 5-1/2 year old daughter and cried in fear as I drove all the way home, which was around 15 miles from DC. I stayed glued to the TV the next few days. The thing about the fear is I worried if more attacks would come.

9/11 and the other events affected my son deeply, and a year later he became pretty depressed. His innocence had been lost too. We had been in NYC in 2000, and have a photo of him ice skating in Central Park with the WTC in the background. He was so happy. I hadn't really paid attention much to these background buildings until then.

A few days later, my daughter drew the picture below. I asked her to describe what was going on. She said the pilot was was sad because he knew it would crash. Both of my children had traveled on plane rides before, but at only 5, she had an real understanding of what one looks like up close and to be inside. She otherwise showed no stress. 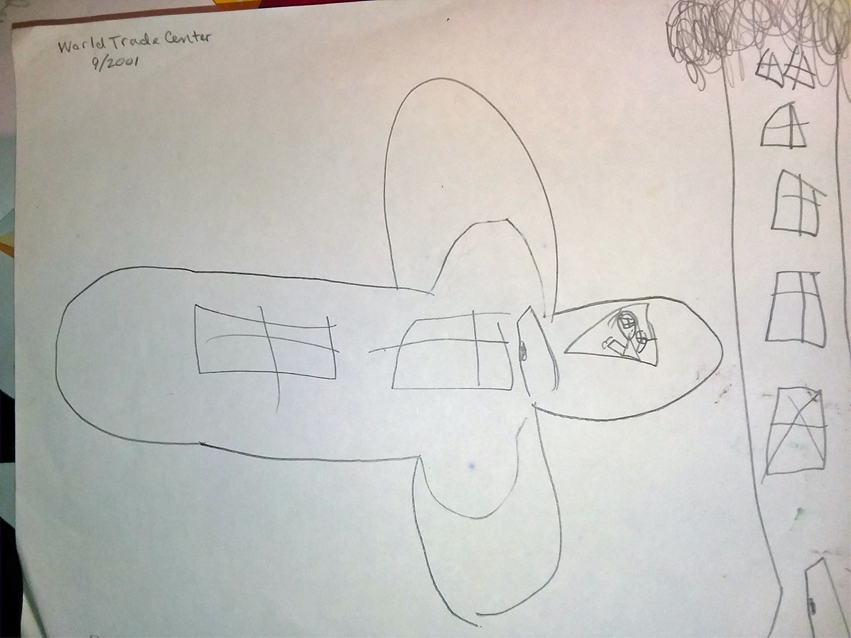 ​
A week later my family hung out at the National Mall, which is between the Capitol and Monument, on one Sunday. As Washingtonians, we were so happy the Capitol hadn't been attacked. Then darn it, the next day the news reported the Capitol was being closed due to anthrax being mailed there, and that week a postman died. In October 2001, the DC Sniper was killing people randomly. We drove right past all the police car racing to the scenes on that first morning. By fate, we would have been at the Starbucks at the exact time when a lady was shot and killed, but was delayed. Just going to the gas station until they were caught took an act of courage.

My daughter, now 23, is among the youngest millennials who grew up in the age of distant, endless wars and with a distant memory of what happened on 9/11, and the unraveling of society. She and her friends have normalized this and seem to take it stride, and it doesn't stop them from traveling. In the past 2 or 3 years, one of her best friends and her mom missed a bombing in France by an hour. Her friend was initially upset, but later shrugged, saying she and her mom were just lucky.

Where as my generation obsesses about disasters, they get on with their lives. It is for them, the norm. It's gotten to be no different with mass shootings. When one happens and no one they know was touched, it's a matter of that was horrible, these guys are crazy, and I'm glad I wasn't there that day. Meanwhile I worry often about both my kids, but try not let them know. Life, after all, is for the living.

She likes to draw and paint as a hobby, including looking at cartoons and drawing them free hand. This summer she made this one below. 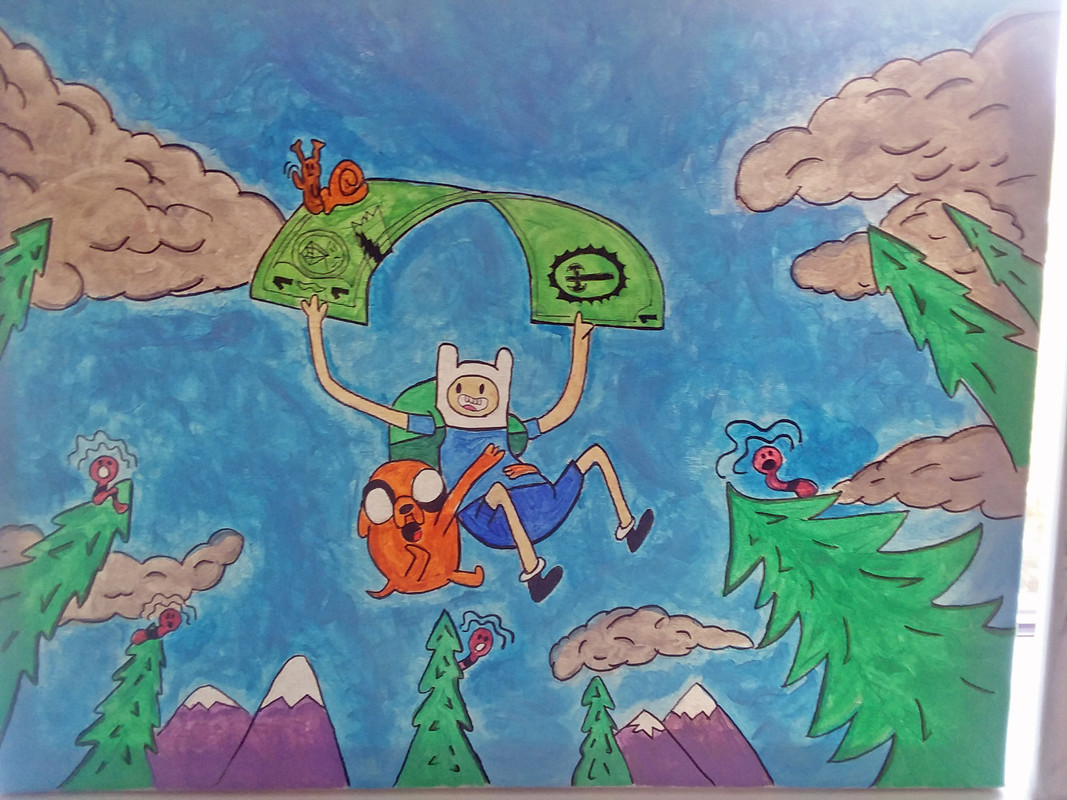 ​
Until today when I thought of 9/11, I thought it was really cute. But as I contrasted her old picture to the new one tonight, it made me wonder if on some unconscious level, it affected her more than I thought. In her unconscious mind, perhaps, she is optimistic that somehow she will always be safe. I hope so.

What are your thoughts about that day, and/or the luck factor?
► Show Full Signature
The PF Photo Contest Voting Poll is open until early Jan 27th.
Click this link to see our great photos and Vote!

I agree the ever present threat of terrorism has been normalized in some ways, which is sad. It is a different type of threat the millennials have. They are the only living generation who grew up in a time where a war crossed into our borders.

Every generation is touched by war though. The baby boomers had the Cold War, the duck and cover drills in grade school, and the loss of lives and demoralization of returning soldiers in Vietnam. The generation before them had the holocaust and the loss of life in the world wars. Different types of scars but still all horrible, and repetitive....we are a violent species.

We can, and should continue to revisit the horror of 9/11 to honor the victims and remind ourselves to not be complacent about our security. And yes, I agree, it is dumb luck why some survive and some don’t.

One thing 9/11 did do was unite us a nation for a brief period. We’ve lost that in our current polarized political climate. Even in my area, three hours north of NYC, the regional trauma center here mobilized on that day to accept victims of the attack. As a nurse, I was on standby for that. Unfortunately, there were no victims to care for, most were dead.

I plan to honor the victims by celebrating the beauty of life today. Maybe someday in generations to come, our species can figure out how not to kill each other.
► Show Full Signature
The Hooligans

Joined Nov 9, 2015
·
3,082 Posts
My 11-year-old daughter and I were watching TV, watching the horrible accident of the first plane. The second plane sent shockwaves through us both. Then the Pentagon. I went cold. Like being thrown head first under the ice.

I shifted from shocked adult to Mom. What is she watching on the news? This isn't OK. I took her to her room and turned on the TV. Every channel was running footage. Every single one, except Cartoon Network. I turned on Cartoon Network and let my child rest. I will forever be grateful to Cartoon Network for their executive decision to just run cartoons non-stop. It was an island of safety for my daughter on the most unsafe day of her life.

The phone rang. My mother-in-law. Have you heard from him? No. Nine hours later, my brother-in-law called. "I'm alive. I have to go." Luck had him in a different part of the building.

It's impossible for schools to teach kids what that felt like. For kids now, this is the distant past. It's like the footage of World War II's unthinkable atrocities was for me as a kid. When we watch World War II footage, we know how it all ended. Kids today know how 9/11 unfolded. Watching it live, though... Sitting there, telling my child I didn't know if we were watching her uncle burn to death? I'll never forget that. I'm grateful that he wasn't hurt. I grieve with those who did watch their family members die.
► Show Full Signature
​
Gave Great Light CD RN RA RE RAE RM CGC TKN TKI Achiever Dog​
Type 1 Diabetes Alert Dog​
Noelle's Diabetes Alert Dog Training: https://www.poodleforum.com/23-general-training-obedience/221474-diabetes-alert-dog-training-update.html
Noelle's Adventures in Competition Obedience: https://www.poodleforum.com/24-performance-agility-obedience-hunting/246282-noelles-adventures-competitive-obedience.html

Joined Apr 2, 2014
·
1,983 Posts
Mfmst- Thanks for the reminder that there are still folks around who were alive each when Pearl Harbor was struck. I misspoke earlier, that was also an attack on our shores.
► Show Full Signature
The Hooligans

Click-N-Treat said:
... Nine hours later, my brother-in-law called. "I'm alive. I have to go." Luck had him in a different part of the building.

It's impossible for schools to teach kids what that felt like. For kids now, this is the distant past. It's like the footage of World War II's unthinkable atrocities was for me as a kid. When we watch World War II footage, we know how it all ended. Kids today know how 9/11 unfolded. Watching it live, though... Sitting there, telling my child I didn't know if we were watching her uncle burn to death? I'll never forget that. I'm grateful that he wasn't hurt. I grieve with those who did watch their family members die.
Click to expand...

What a horrible direct experience with all the worry, but thankfully for your family your brother-in-law survived.
► Show Full Signature
The PF Photo Contest Voting Poll is open until early Jan 27th.
Click this link to see our great photos and Vote!

Joined Jun 18, 2014
·
9,170 Posts
I remembered Pearl Harbor, because my mother was shocked when I didn’t recognize her reference to “a date that will live in infamy”. December 7th was just another day to me at that time. ( I don’t think we had gotten around to the World Wars in school history.) September 11th wasn’t an act of war, but an act of terrorism on primarily soft targets who happened to work in the Twin Towers and the Pentagon. The brave passengers of United Flight 93 spared further damage to the capitol, maybe even the White House. Does anyone else think we should have a national moment of silence, flags at half mast in every state so we never forget? I had a conversation with a TSA screener who told me no one remembers why they have to take their shoes off.

Joined Jul 21, 2017
·
461 Posts
Pearl Harbor was not an act of war either, as we were not at war with anybody at the time. The US entered WWll as a result of having been attacked by Japan on Dec. 7. Prior to that we were staying out of the conflict.
1 - 8 of 8 Posts
Join the discussion
Continue with Facebook
Continue with Google
or sign up with email
Recommended Reading
Read More
Read More
About this Discussion
7 Replies
5 Participants
Last post:
reraven123 4 months ago
Poodle Forum
A forum community dedicated to all Poodle owners and enthusiasts. Come join the discussion about breeds, training, puppies, food reviews, grooming, and more.
Full Forum Listing
Explore Our Forums
Poodle Talk Poodle Pictures Poodle Grooming Member Introductions Poodle Health
Popular Communities