Joined Jul 23, 2012
·
22,864 Posts
I have a former student who grew up in El Salvador during her early childhood where she had a relatively mild and routine case of Dengue. Then they came to Long Island and after many years she went to visit family still in El Salvador at which time she got sick again. Thankfully she had returned to Long Island before the worst of her 2nd infection which put her in intensive care at Stony Brook University hospital. Many people received calls about her situation at her lowest point out of fear she wasn't going to make it.

Joined Jun 18, 2014
·
9,552 Posts
Gilead Sciences has set the price for remdesivir, the only antiviral treatment approved by the USFD at $520/ vial. Five day treatment means that line item is $3,120 per patient with private insurance. The VA, Coast Guard,Indian Health Services, Bureau of Prisons, and the DOD get a “government price”. Sadly, not Medicare or Medicaid recipients because they can’t negotiate drug prices. Further to my financial PSA to stay safe and stay out of the hospital, if you’re in the US.

Joined Nov 9, 2015
·
3,304 Posts
Not too far off the price of insulin. I think Gilead Sciences held the price down to keep it on par with insulin, because they could have done far worse. In fact, compared to what insulin costs every year, Remdesivir is a bargain.

Joined Jun 18, 2014
·
9,552 Posts
Yes, it could have been far worse. They seem determined to have the supply, so that it will be available to those who need it. I’m grateful that ICU personnel have something therapeutically effective in many cases. The price of insulin is a crime, or should be.

Joined Nov 9, 2015
·
3,304 Posts
Insulin pricing in the USA is a human rights violation. Same drug is €6 in Spain. The problem in the USA isn’t that insulin can’t be cheaper, it’s that there are powerful people who want it to stay expensive.

The price of coronavirus drugs need to be profitable enough to make manufacture worth it, but not so expensive it appears like price gouging. The short treatment course for coronavirus makes this price seem fair. Insulin being a life long, life sustaining drug, the price should reflect that. Insulin should be priced like eggs, milk, and bread.

Joined Feb 25, 2019
·
633 Posts
My biggest fear is that, like polio, and like SARS, it will lead to long term poor health for a significant percentage of people (like PTP's article). Death is bad, high levels of long term disability is in some ways harder for society to cope with (I say this as someone who is partially disabled). Especially scary if immunity doesnt persist well, and there are multiple chances to catch it, or people catch it again while still battling the after affects from previous bout. In Canada, this will be expensive on a social program scale, in the US.... I dont know how you guys would/will cope.

For Want of Poodle said:
My biggest fear is that, like polio, and like SARS, it will lead to long term poor health for a significant percentage of people
Click to expand...

I still don't know if I had it in March, and was unsuccessful in joining an antibody study, but I still have a faint whistle when I breathe at night, and I haven't gotten my normal sense of taste back.

Not huge in the grand scheme of things, but scary to imagine the other effects that folks will be dealing with. Just the trauma of the ICU and intubation can have life-altering consequences. 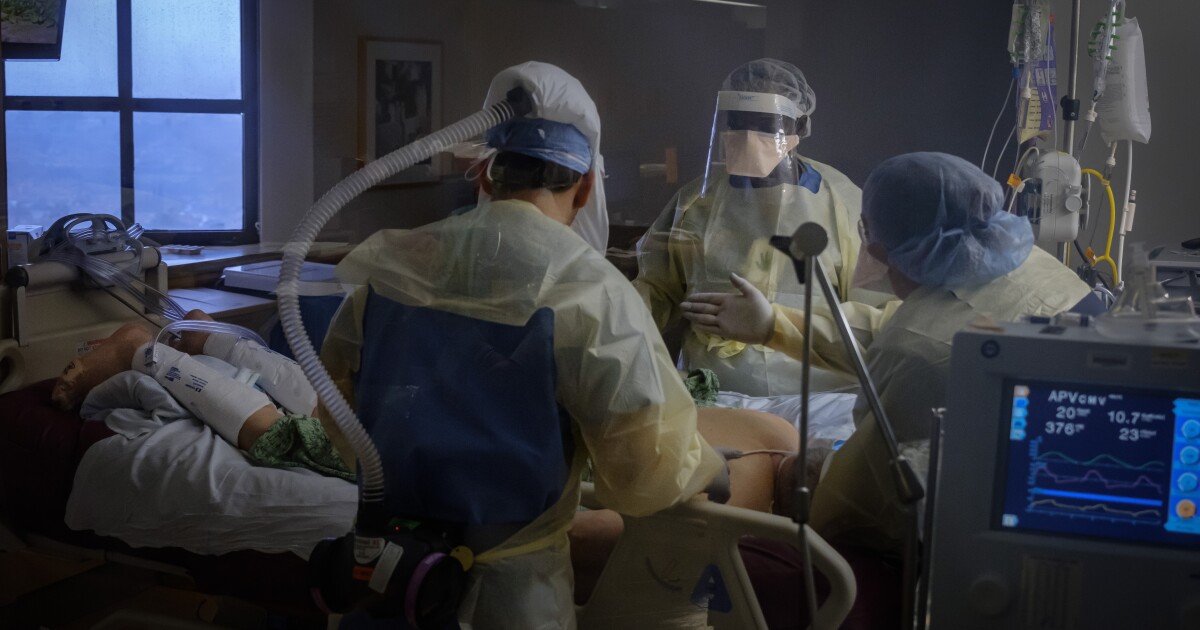 Op-Ed: The trauma that comes after surviving COVID-19

Intensive care patients, even if they beat the disease, are likely to suffer PTSD and major cognitive problems, but the health system rarely treats this chronic condition seriously.

Patients will need mental health care. So will healthcare workers. And so will all of us because this is a traumatizing time. Anyone else keeping a journal? It's how I'm staying sane.

Patients will need mental health care. So will healthcare workers. And so will all of us because this is a traumatizing time. Anyone else keeping a journal? It's how I'm staying sane.
Click to expand...

I've been staying sane in the strangest way: A cozy mattress piled high with blankets on the living room floor, and a running list of all the movies I've watched on it so far. Like my own little coronavirus film fest.

Embracing the oddness of this all has been therapeutic, as has acknowledging my mind and body's need for a little extra comforting.

Joined Jan 1, 2017
·
3,423 Posts
My normal is pretty much normal. I go out shop etc. I don't eat out though inside any restaurant though I'll go in for a pickup. I wear a mask, carry hand sanitizer, and wipes. I am so far not fazed. We do take shoes off in garage, change & shower, more often than before. So I have more wash and go thru more laundry detergent. Bleach is a must in this house because of my husbands dialysis, everything gets cleaned in "his room" with a solution of bleach and it has to be poured down all sinks and toilets , to prevent them from clogging because of the solution. I notice they now make a bleach bottle that looks very similar to the gallons ontainer but its not and its 2x the price.

Joined Oct 2, 2010
·
1,178 Posts
I'm considering turning some of my old dog related t-shirts into masks. I don't think there are any poodles though; just agility, scent work/nosework, and plenty of paw prints.

Joined Nov 9, 2015
·
3,304 Posts
Visit Etsy. Lots of poodle print masks to choose from. I just found a cute one with polka dots and poodles. When I teach dog classes, I want to have dog related stuff to wear.

Joined 10 mo ago
·
3,546 Posts
My friend was getting ready to visit her parents and decided to take a test to be safe. She said it took 30 seconds, results in 2 days.

No symptoms. Vague "seasonal allergies" that she didn't think anything of. She'd have been staying in her parents' home, completely unaware she was contagious.

PeggyTheParti said:
My friend was getting ready to visit her parents and decided to take a test to be safe. She said it took 30 seconds, results in 2 days.

No symptoms. Vague "seasonal allergies" that she didn't think anything of. She'd have been staying in her parents' home, completely unaware she was contagious.
Click to expand...

Wow. That must have really freaked her out.

Joined Nov 9, 2015
·
3,304 Posts
That's so scary. I think that's the worst part about this virus is how mild it can be for so many of us. I could be walking around shedding virus like a human confetti cannon and have no idea.

Joined Sep 22, 2017
·
2,260 Posts
Found ourselves at the ER again yesterday, this time for David. He has a history from 2009 of a cardiac blockage and a stent placed, and a history of heart disease on his dad’s side. It caught up with him again yesterday.

Very different this time tho, if I can believe him. No occasional symptoms over a period of several years, just a bad day, a trip to the ER, crashing and coding out in the ER, coming back, a trip to the cath lab, a new upgraded stent, and he’s sending texts the next day. This could have been the end. His last words would have been “I’m falling”.

The echocardiogram to measure damage to his heart was done today around 9am and we haven’t been given the results yet so we can know when he’ll be dismissed. The on call card who did his cath is his (now) regular card dr so that was handy.

If you’ve never been in an ER when a Code Blue is called, it’s exactly like the tv shows and movies, down to the dialogue, at least from the outside in. They naturally kicked me out as soon as his head dropped after saying he was falling (what I saw and heard) and when the machines started making their alarming noises and flat lines (what they saw and heard). The choreographed pandemonium was amazing. Even as I was standing outside the room wondering how many more running people they could fit in there, the chaplain raced up to me to see if he could offer his help and I heard “we’ve got a heartbeat”. We’d been at the ER for maybe 30 minutes by that time. He’d already put off going to the ER at his drs office recommendation once yesterday, so when he asked to go about 2 hours later, we went. If he’d tried to put it off any longer, I know I couldn’t have revived him. But, they could and did.

Today he’s walking the hospital halls, complaining that there’s nothing on tv, sending texts, looking remarkably well, considering. We won’t know what impact this might have just yet but he’s still here, so HURRAH TO ALL HEALTH CARE WORKERS!

It's the same hospital from 2009, so what was different this time during the pandemic, from our perspective?

The current visitor policy in this 504 bed hospital in a suburban Midwestern city is 1 visitor allowed at a time for patients. We're in CCU, but that's for every unit. Two women were managing the people walking in. Temperatures are taken for every person who walks in any public door. You're asked how you're feeling and if you've had any specific symptoms. You're asked to use hand sanitizer, given a mask if you don't come in with one, then sent on your way. Signs are everywhere to remind everyone, so many that you become blind to them. People do respect social distancing more than anywhere else I've been out in.

In the ER, everyone was busy but not seeming stressed. Their work clearly took priority over any personal concerns they might have had for their own health. The admitting ER Dr had developed a little ritual for herself to keep from fully extending her hand to shake mine. Every new person coming in had specific tasks to perform. They were efficient and warm, to us and each other, taking time to do things right, even with the heart attack happening in front of them.

When David crashed and I was told to leave, I heard "This is real, folks" as the code was called. That's when they all showed the true beauty of humanity. Even as I was scared for David, I marveled at these people leaping in to help a stranger and their dedication to their calling in spite of any risk to themselves.

After they got him back, after the cath, after wheeling David up to the CCU, one of the RN's came over to me, told me he was in the best of hands and risked herself to give me a hug. I think I needed it right then.

Today when I went back, I realized that I was no longer seeing the masks, I was seeing the people, and they were smiling.

Whatever tomorrow brings, I have them, every single person working at that hospital, to thank for today.

Joined 10 mo ago
·
3,546 Posts
Wow. What a beautifully written account of such a scary experience. I hope you're doing okay right now. And I am so happy David got to the hospital when he did, and that you got to witness those amazing humans doing their jobs so well.