PeggyTheParti said:
I’d suggest starting from the beginning and rewarding for calm. With Peggy, we began by opening the crate door for a sit. Literally the moment she sat, the door (in her mind) automatically opened. Then you can open it for laying down. Then wait a few seconds longer before opening it. Then a minute.

The idea is that good things happen when puppies are calm in their crate, not bad things. If we start out “punishing” calm crate behaviour by leaving, we’re sending the wrong message.

The next time, put a bunch of kibble in a Kong toy, along with some freeze-dried liver and a bit of honey in the Kong, so it is difficult to get the food out, and put the Kong in the crate. Let the dog in and shut the door. Before he’s finished trying to get all the food out, after about 10 minutes, open the door, let him out, take the Kong away, and ignore him for five minutes.

What is the dog learning? “When I’m in the crate, my owner talks to me all the time, she sits next to me and reads me a book, and keeps feeding me. And there are toys in the crate. There are no toys anywhere else – that crate is OK!”

If a dog is expressing dissatisfaction with its lot, you haven’t really done your job as a trainer to teach him to want to do what you want him to do. 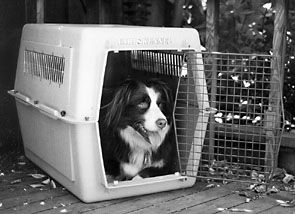 Crates are second only to choke collars as the most misused training equipment forced upon dogs. But when crates are used right, they have significant benefits.