There's a link at the end of the article, in case anyone would like to help.

Joined Jun 4, 2010
·
13,224 Posts
I see one ray of light - all the dogs in the photos are at the front of their pens seeking human contact, rather than hiding in fear - with luck once they are checked out they will be able to settle into happier homes. But 111 dogs - even the thought of how to cope with feeding and cleaning is overwhelming. One wonders how it got to that number with no one intervening...

Joined May 27, 2018
·
1,645 Posts
Their fur is so dirty, but you can just see beauty and promise in them. People seem to snatch up poodles when they end up in rescues and shelters rather quickly....hopefully they all go to good homes.

Mfmst said:
The volumes of recently seized poodles are staggering. Almost 400, reported on PF this week, alone!
Click to expand...

The woman is not facing any charges because she was fully cooperative with authorities.

In other words, she paid off the right people.

But no one holds these monsters accountable. My Daisy was from a disgusting puppy mill breeder on Long Island who was 'fined' by the PCA for unacceptable conditions. I saw the 'conditions', she had birds and other animals mixed with puppies, and my poor Daisy was in the basement. There is no real control of these monsters, they pay off politicians.

More on Irene Monroig, no doubt still in business. Yes, I found her on PCA and didn't do more due diligence.

Joined Sep 23, 2017
·
3,982 Posts
Question: Has anyone saved a link about small dog hoarders? People who do this are cut of a different cloth than puppy millers. I would especially like to read interviews with them and their families, a mental health diagnosis, and their thoughts of how they fell into this obsession.

Note: This article below also has many photos (link).

Article title: "They were loved, but they were grooming nightmares. 116 dogs rescued from Warren County home"

A total of 116 dogs were removed from a Warren County home after a house call was made to police on Sunday.

Original reports claimed 25-30 dogs were in the home; and then rescuers coined the term "The Lucky 111." But after seven hours of work to remove the dogs from the mass hoarding situation, the final count is 116.

This is a mental health issue, Hurley said. No charges will be pressed.

Police arrived at the home on Sunday, and a dog warden was contacted Monday. By Tuesday, Hurley and the Humane Association became a part of the rescue team.

It is not known how long the dogs were being housed in this manner. However, Hurley said that the family claimed "it was not this way two and a half years ago."

'The dogs were not malnourished'

"They were loved, but they were grooming nightmares," Hurley said.

On Wednesday, 16 dogs were left to be groomed before all get vaccinated, dewormed and tested for heartworms. Hurley said that the neutering process will begin tomorrow.

None of the animals will be put down, although some have deformities due to inbreeding. Two of the dogs have missing limbs, one has no eyes and a couple are blind – although Hurley said that the blindness could be due to old age, not necessarily from inbreeding.

A couple of the dogs also suffer from cryptorchid, or undescended testicles.

Some of the pregnant and birthing mothers are with foster families, Hurley said. The rest are being housed at the Humane Association. Hurley said that spacing was not an issue, as the dogs were all small poodle mixes and rescue shelters made room for more adoptable dogs.

The dogs are on their way to being adoptable pets, but for now the lucky 116 are staying at the kennel. Hurley said she will post updates to the Humane Association's Facebook page for those hoping to adopt.
Click to expand... 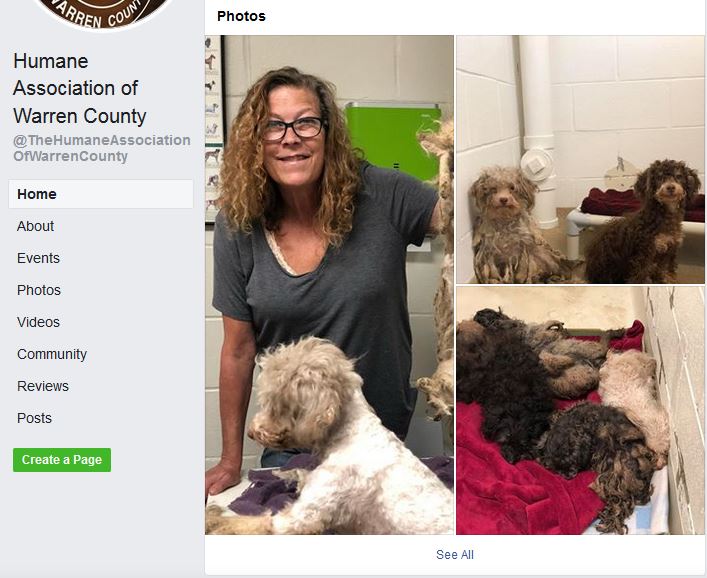 Charges should be pressed. She is responsible for the pain of many innocent lives. There isn't a light behind her eyes.

But hey, if puppy mills skate, why shouldn't these monsters.

Joined Jun 18, 2014
·
9,993 Posts
A dog with no eyes? I can’t unread that. Hoarding, whether it’s “stuff” or animals is a mental health issue, so my harshest judgement is for those that have a slick website to sell those 101 Dalmatians in the basement that have AKC registrations. I am grateful that most of the dogs are alive. I read about an animal hoarder this week with 80+ that were not.

Joined Sep 23, 2017
·
3,982 Posts
Mfmst, yes, about the one born without eyes, and also two missing a leg. That level of inbreeding is so extreme that I had to read it twice. It's haunting.

I noticed most of the photos are not of puppies, meaning she kept some, most or all and wasn't selling them, just letting them breed uncontrollably. In my mind, I tried to imagine how this could happen. I have worked with a few women over the years who couldn't stop having babies. They adored children in the baby stage, and once that was ending, had another, and another, and another, etc.

So how did this lady get started? With only one, then two of the opposite sex? Then kept the puppies, and then let the puppies breed and continued this? Was it the birth process and puppy stage that she became addicted to? How many years did it take for her to end up with 116 known dogs? What was the impact on any family members she lived with?

When I bought two Himalayan cats back in the 1980s, the breeder had a serious personality and/or mental health problem. She had beautiful Himmies many won shows, and my male easily made champion. I don't know why she liked me so much, but she showed me her home. Cats were everywhere, even in her bedroom where she had a large cage for them to mate. Not whelp, but to mate. I thought that was freaky.

I also talked with her teenage daughter. She was in the gray zone of being verbally and emotionally abusive toward her. That kid looked so miserable and unhappy. I also saw her husband, a slim guy in his 50s who seemed oblivious to his wife's treatment of their daughter, nor did he mind the woman showing me their house including the crazy bedroom setup and cats wandering all over the house. It was strange. The cat smell was strong. She also confided to me that she had multiple vets so no one would catch on that she had so many.

Cat ladies aren't new, but I have a hard time understanding how someone does this with small dogs and hides them for so long unless they live far apart from neighbors who can't hear the barking or see the dogs outside relieving themselves.

There is a growing link between OCD (Obsessive Compulsive Disorder) and strep throat. I wonder if that's what happened to this lady and other hoarders, and if the strep went untreated or treated too late.
1 - 11 of 11 Posts
Join the discussion
Continue with Facebook
Continue with Google
or sign up with email
About this Discussion
10 Replies
7 Participants
Last post:
Vita Sep 26, 2019
Poodle Forum
A forum community dedicated to all Poodle owners and enthusiasts. Come join the discussion about breeds, training, puppies, food reviews, grooming, and more.
Full Forum Listing
Explore Our Forums
Poodle Talk Poodle Pictures Poodle Grooming Member Introductions Poodle Health
Recommended Communities